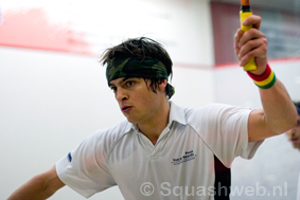 The longest match of the championship brought the inaugural NetSuite Open to a close when Laurens Jan Anjema held off Egyptian challenger Omar Mosaad in a tie-break decider to win the PSA World Tour International 35 squash title at the Arillaga Center for Sports & Recreation at Stanford University in California, USA.

"Omar came out of the blocks fast," said Stanford University Squash Coach Richard Elliott. "He was very aggressive and jumping on any of LJ's loose shots."

The third-seeded 23-year-old from Cairo soon opened up a two-game lead against Dutchman Anjema, the world No12 ranked just a single place higher.

The third game was tight, level up to four-all before the rallies began to lengthen as Anjema seemed to be working the tall Egyptian with his boasts.

The six-time Dutch champion pulled away to reduce the deficit, then drew level after the fourth following a game characterised by errors from Mosaad.

"The fifth was nip and tuck all the way through - with tons of lets," continued Elliott. "The scores were level up to three-all, then Omar pulled away with some typical trademark nicks and got to an 8-5 and 9-6 lead."

But Anjema battled back to earn his first match-ball at 10-9. Mosaad saved this and proceeded to earn two further match-balls of his own - at 11-10 and 12-11.

And the drama continued as Anjema again levelled the match before gaining his second championship-ball which - after numerous long rallies that ended in lets - he finally won a stroke after 100 minutes!

For all the latest Tour news: www.psaworldtour.com